Jason Hurst, the Vice President of Innovation at Bell Flight, speaks to Arabian Reseller about how UAM will shape the cities of the future, the purposes UAM vehicles will serve, the barriers to adoption of UAM, and more

How will UAM shape the cities of the future?
Urban Air Mobility has been a hot topic for some time now with technology and mobility companies joining together to help accelerate this further. With UAM, we will have a safe, accessible, and sustainable mode of transportation for cities all over the world.

An element of UAM is electric vertical take-off and landing (eVTOL) aircrafts which will ensure that a significant proportion of the population will be able to travel within and between cities, cost-effectively. These eVTOL aircrafts will in turn have a positive impact on how people interact with one another. When linked to a smart city, UAM will provide a fully connected and sustainable mode of living.

For what sort of purposes are UAM vehicles being developed currently?
UAM vehicles such as eVTOL aircrafts are being developed for a variety of purposes that range from air taxis for transport and commuting between suburbs and cities, to drones for logistical support. Other applications have been in the use of emergency services to aid first responders or transport blood, as well as traffic monitoring from above. UAM adds an entirely new dimension to mobility in turn changing transport, travel, and time.

Bell, for example, has revealed the Bell Nexus 4EX, a four-duct concept vehicle configurable in an electric or hybrid-electric platform that can travel farther or to more remote locations, based on your mobility needs. Another product Bell has in the UAM portfolio is the Autonomous Pod Transport (APT) 70, a new unmanned aerial vehicle (UAV) designed to transport cargo. With APT, Bell has created a UAV capable of performing multiple missions for emergency services, logistics companies, and the military. 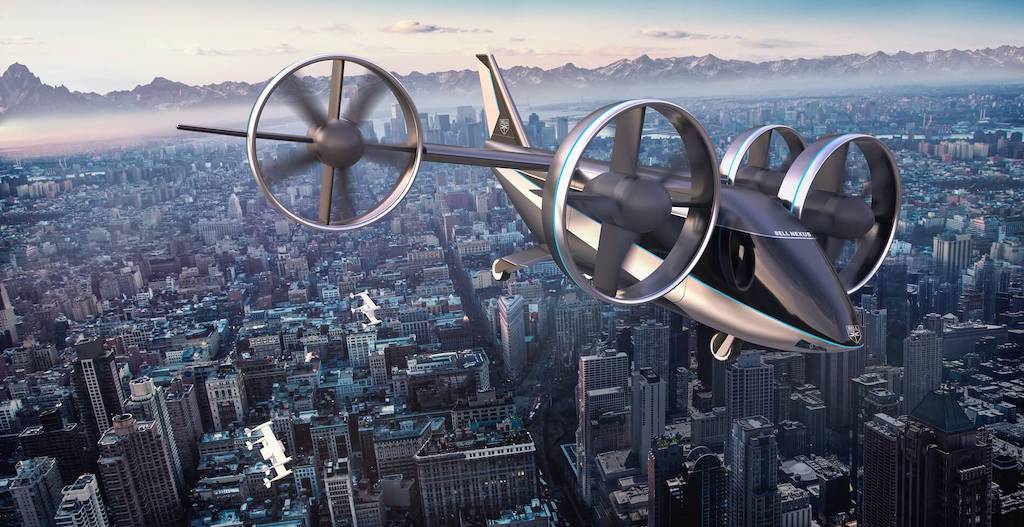 How close are we to UAM becoming a reality for regular users?
UAM is close to becoming a reality as several companies worldwide are finding methods to introduce their prototypes to market. We live in an era where mobility companies now have the technology to reimagine how we move, both personnel and goods. Given where industry is at today on both infrastructure and development, Bell believes a true timeline is mid to late 2020s for a commercially, viable urban air mobility ecosystem.

What are the biggest barriers to making these vehicles a reality?
There are a few barriers that need to be addressed before introducing UAM vehicles in mass to the market. For UAM to work, smart cities need to be developed to connect everything from point of landing, charging stations, and more. This is something that urban planners, technology providers, and mobility companies need to work together to achieve.

There is also the question of safety and ensuring that the technology being developed is tested without cutting any corners to make this dream a reality. This will require education to highlight the capabilities that autonomous vehicles possess. Similar to aviation, whereby people slowly warmed up to the idea of autopilot in planes, it will take time for people to fully trust and understand the system.

Bell’s Nexus aircraft for instance looks to slowly introduce people to eVTOL aircrafts by offering a 4+1 configuration that allows for pilot control should the need arise. This in turn will make people more comfortable with the concept.

How much has UAM technology progressed over the past few years?
The technology involved in UAM has progressed at a rapid rate. This alone is pushing the speed of acceptance. For example, new battery systems are being developed that allow for more capacity, there is an increase in the development of artificial intelligence and machine learning systems and there has also been more research towards autonomous mobility in turn accelerating testing of the technology.

That being said, there is still a lot of work left to do. For starters, autonomous mobility needs to be mastered before multiple passengers can be transported. We also need to ensure that these vehicles are safe and have an increased capacity for their batteries, especially if they are to transport passengers in urban, congested areas.

What aspects of the UAM technology are you most excited about?
We’re excited to pursue many technology advancements in the UAM space. To name a few; autonomy, energy storage systems, electric propulsion, and noise reduction. With advancements in these technologies, we can grow our expertise and shape the future of flight through revolutionary,
innovative vehicles.

How much of an issue are regulations in bringing these technologies to market?
These vehicles bring a new set of challenges to regulators because they will be different from the traditional aircraft we see today. For instance, we need specific standards that cover the advanced technologies that will be found in these aircraft, such as electric propulsion, energy storage systems, and detect and avoid systems.

There is also a lot to be done on the infrastructure side as well including requirements and guidance on vertiport construction. The weight barriers needed for these vertiports are very different from your traditional helicopter landing area or heliport so will need extra attention.

At Bell, we have been working closely with industry groups to provide recommendations to regulators on areas including infrastructure (vertiports), simplified vehicle operations, and eVTOL pilot experience. We want to make the transition to UAM adoption as smooth as possible for all parties involved.

The COVID-19 pandemic is increasingly accelerating the adoption of technologies – could you see it having an impact on how quickly UAM is adopted?
COVID-19 has had a major impact on businesses worldwide for sure. UAM is not in its infancy so I don’t think the pandemic had a major effect on its acceleration except that it will bring about a rethink on what we thought we knew about safety. Moving forward, UAM vehicles will need to be equipped with the necessary precautions against COVID-19 and other possible diseases.

UAM also has the potential to becomes more attractive as it means less interaction with other people as compared to traditional forms of public transport such as buses or trains. COVID-19 did bring to the light the need to develop autonomous technology to keep supply lines operational, hence strengthening the argument for UAM vehicles to be more widespread should this ever happen again.